I committed to reading two books every month in 2013, one nonfiction or business book, and one book of fiction. Here are this month’s selections:

Riding the Dragon. Ten Lessons for Inner Strength in Challenging Times by Robert J. Wicks. Dr. Wicks is a psychologist and a writer on spirituality and personal growth. Riding the Dragon refers to a Zen concept that we should embrace difficulties and “ride with them” rather than running away from our feelings of discouragement, or attempting to conquer these feelings.

One of my favorite quotes: “[Tibetan teacher Chogyam Trungpa] warned those who were new that, ‘a true spiritual path is arduous and demanding, involving one insult after another [emphasis added]. If you haven’t started, it’s best not to begin…But if you have begun, it is best to finish.'” Bazinga. Dead on. ★★★★

The Three Musketeers by Alexandre Dumas. I am sure I am not the first person to ask this question, but why does the title refer to three support characters? The title should be, D’Artagnan – The Greatest Musketeer. D’Artagnan is indeed the center of the story and despite his (oft-mentioned) youth, is the best swordsman, the bravest, the most loyal, the most discreet, the most trustworthy and the cleverest musketeer. Porthos, Athos and Aramis are actually a bit on the silly side, each with a glaring character flaw.

It is an awfully fun read, however, and the insights into 17th Century French attitudes and customs are enlightening.

Quick quiz: the four Musketeers represent the four humors (Sanguine, Choleric, Melancholic and Phlegmatic). Which one is which? ★★★★ 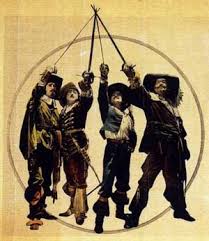