I Am Not Making This Up

Per the New York Times, an elephant in the Ringling Brothers and Barnum & Bailey Circus named Carol was injured in a drive-by shooting outside the BancorpSouth Arena in Tupelo Mississippi last week. Carol is expected to fully recover.

A spokesperson for the Tupelo police department stated that the investigation is ongoing but preliminary evidence indicates that the shooting may be gang related, as there were multiple assailants in the vehicle and the suspects had distinctive teardrop tattoos. Based on an eyewitness account, a police sketch artist produced this image: 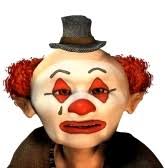 All right, I made this part up.