By now most are familiar with Pope Francis and his growing myth: Argentinian Cardinal Jorge Mario Bergoglio, the Archbishop of Buenos Aires, gave up the bishop’s quarters and rented an apartment where he cooked his own meals; after being elected Pope he eschewed the Popemobile in favor of a simple sedan, paid his own hotel bill, thanked the hotel staff and carried his own luggage; in his first Holy Thursday service he washed the  feet of prison inmates (Catholics see Corporal Works of Mercy #6) that included two women (scandalous!), one of whom was Muslim (really, really scandalous!).

This guy is the real deal. What Would Jesus Do? Just watch Pope Francis.

From what I understand the first vote for Pope is rarely decisive. Many Cardinals get a few votes each. It seems to be an opportunity for the Cardinals to honor those among them who have shown exceptional service or leadership.

But here is what I find fascinating: in one day they rallied around the quiet guy in the back of the room. 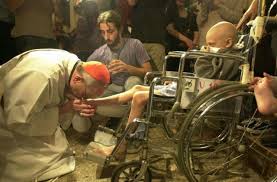