Things Are Going to Get Interesting

I have been following a number of tech blogs lately. Let me sum up the first adopter zeitgeist:
Google/Android Good (meaning hip and “really getting their customers”)
Apple Bad (meaning old/behind the times).
Yes, Google just had their Googlepalooza a.k.a. the Google I/O Developer’s Conference in San Francisco where they rolled out their fabulous new features including maps (with clouds!), Google Wallet (e-mail money as an attachment!) and a revamped Google+ (with Hangouts but apparently no virtual beer). Everybody is a little buzzed, as well they should be. Accomplishment and innovation are things to be proud of.
But don ‘t toss your iPhone in disgust just yet. Apple is a well-funded and brilliant company. And competitive with a capital C, with or without Steve Jobs. So is Microsoft for that matter. For those of you who doubt Microsoft’s ability to create, I have just one word: Xbox (oh, you forgot, huh?).
Apple is not going to take this lying down. They will feel an obligation, nay a palpable need to leap over Google’s latest and reclaim their title as innovation’s Numero Uno. El Jefe. Big Cheese.
And this is great for us, the end users. These guys want to make great things. To move the world. That can’t be said about many companies.
Things are going to get interesting. 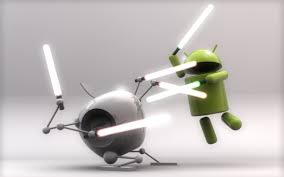